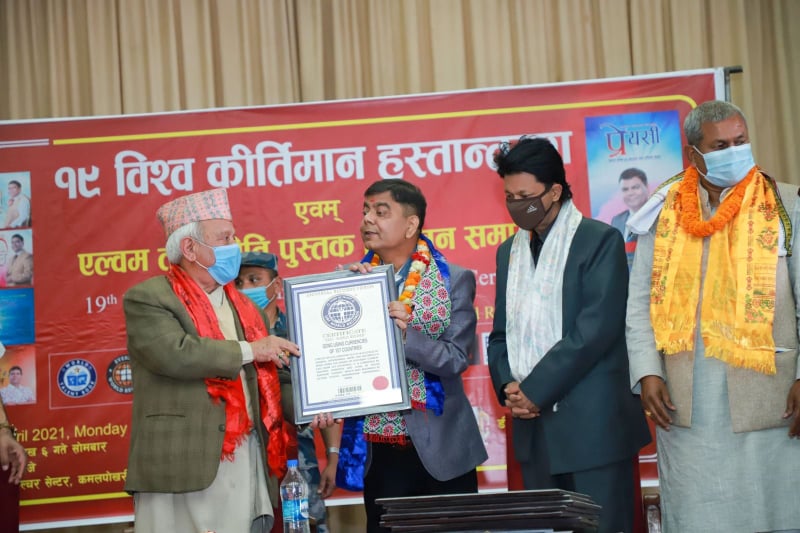 In Nepali song music, Dr. DR Upadhyaya has set the highest world record. The lyricist, who set the Guinness Book of World Records only a few months ago by recording 12 line songs in 12 international languages. Upadhyaya has again set world records in 19 different genres and has set world records in a total of 51 genres. Maintaining social distance between a ceremony in the capital on Monday, Dr. Upadhyay was received by former Prime Minister and writer Lokendra Bahadur Chand and historian and political analyst Prof. Dr. Surendra KC has given certificates of world record in 19 categories. Earlier, Dr. Upadhyaya had set 32 ​​world records in various genres of song and music. Former Prime Minister Chand said, “Upadhyay is the first person to receive certificates from 13 world record organizations in 19 different categories on the same day.” It is a matter of pride for the whole of Nepal, not just for this person. ‘Former Prime Minister Chand said that Upadhyay’s work is exemplary for Nepalis and we should freely praise it. 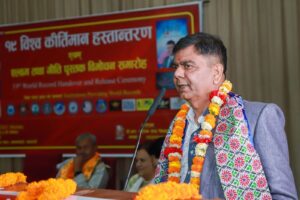 This time, Upadhyay has set world records not only in 19 genres, but also in 13 different world record companies. He has won American Book of Records, Asian World Record, Champion Book of World Records, World Talent Book, Everest World Record, European Record Book, URF World Record, Asian World Record, The Vritis World Record, Veg World Record. , Assam Book of Records from 19 organizations together in 19/19 genres of simultaneous record making. He has received world records in 19 different genres of tourist destinations from 150 countries, the smallest modern song of 18 words, lyrics of more than 200 words, motivational song sung by singers over 60 years, a song book of one thousand Nepali rupees size. There are songs like 164 songs in the name of different birds, songs with the names of seals of 157 countries. Chudamani Devkota, the outgoing president of the Lyricists’ Association of Nepal, said that the news was very pleasant for those involved in Nepali songs and music. He said, ‘Upadhyaya has made a significant contribution to the world of Nepali song and music. This is a very commendable act and we should all be proud of it. 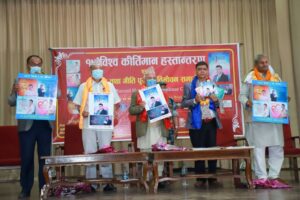 ‘ Record-breaking lyricist Upadhyaya said that he did this to bring Nepali songs and music to the world market more than to the individual. He said, “This record is not only for the individual but also for the country.” Similarly, special guest Prof. Dr. Surendra KC called on Dr. He said that Upadhyaya is doing well for himself and this has increased the pride of the country. Similarly, former minister Rameshwar Ray Yadav said that Upadhyaya had worked with the aim of introducing Nepali music to the world. Musician Santosh Shrestha He claimed that his work, which was associated with Upadhyaya from the very beginning, was oriented towards greatness. On that occasion, Dr. Upadhyaya’s four-song album Dharti and Jeevan, Pratibha, Sapnako Mahal and Dhadkan and two song books Preyasi and Chot were released. Senior singer Gyanu Rana, singer and musician Sagar Adhikari ‘Sharad’ and Jugal Acharya gave musical performances in the program. On the occasion, Santosh Shrestha, Sagar Adhikari, journalist Naresh Bhattarai, Krishna Bhattarai, Tulsi Giri ‘Bhavuk’, Geeta Adhikari, Rajendra Luintel, Subhash Pradhan, Ramesh Thapa and businessman Ramji Awal were also honored. The program was facilitated by Naresh Bhattarai. Dr. Upadhyaya has published 24 albums, 11 novels and three song books. 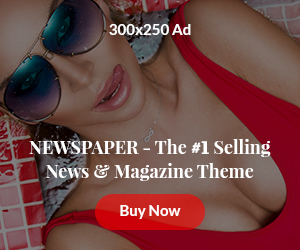 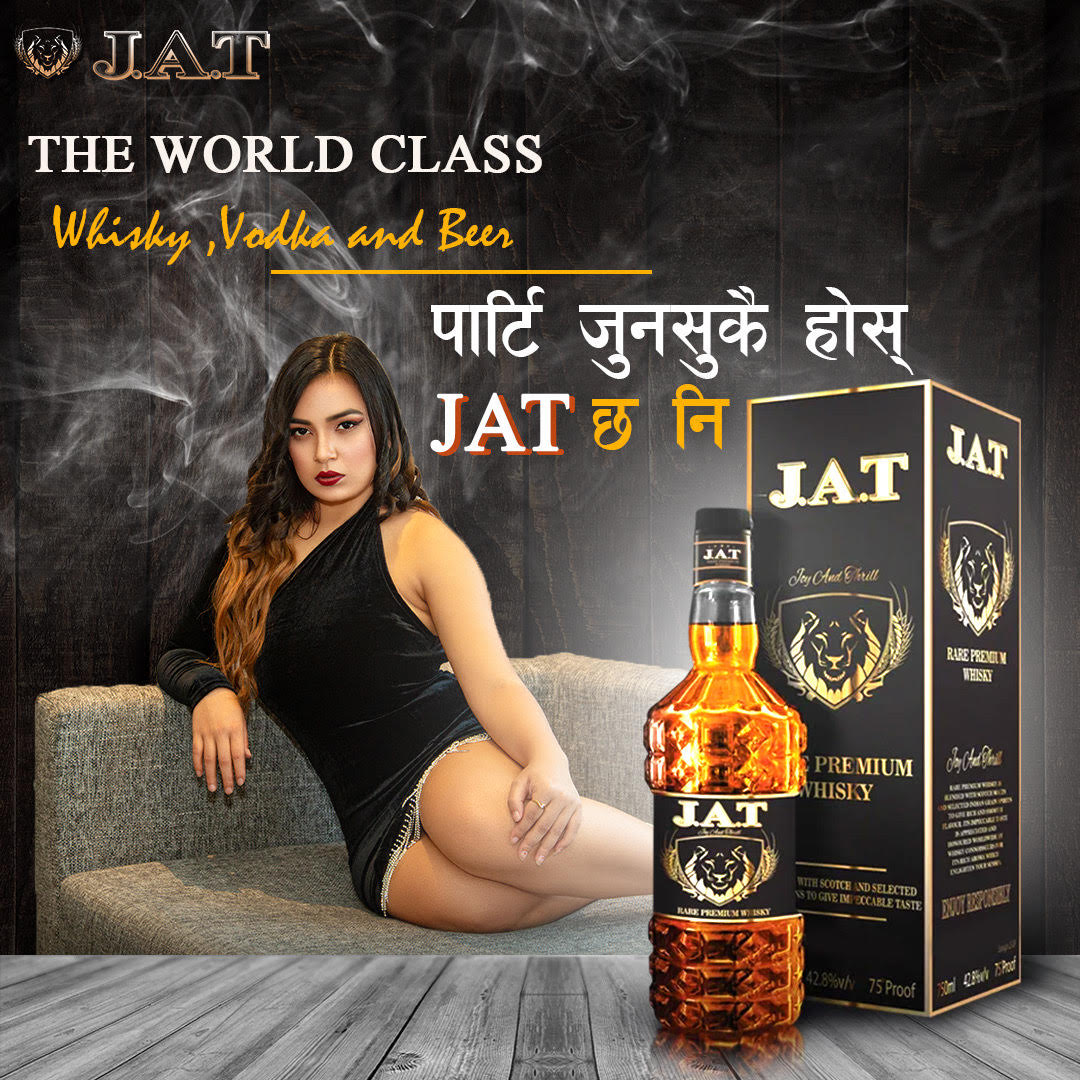 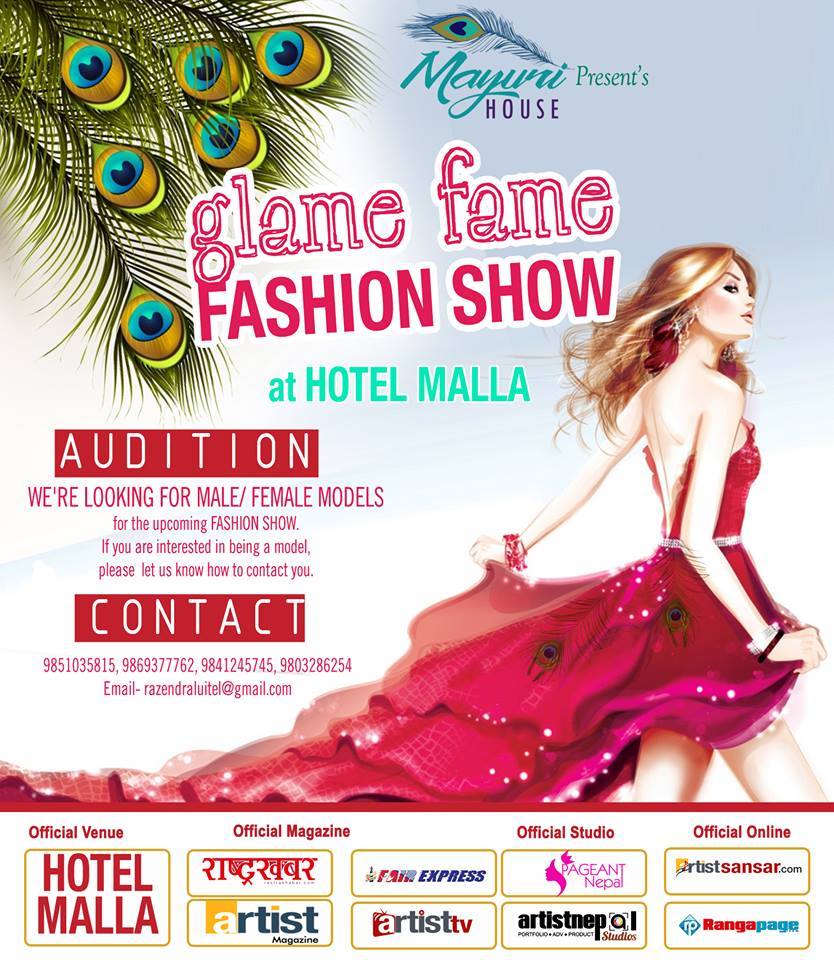 PageantNepal is your news, entertainment, music & fashion website. We provide you with the latest news and videos straight from the entertainment industry.
© Copyright - PageantNepal Maintained by Taregan IT